A new blog post, just not within a month of the last one as originally planned.  Ah well, next time!
This one, is on a very different topic.
Whilst I love writing, it is not my first love.  I’ve found myself involved in a variety of weird and wonderful interests over the years and I’d like to tell you about some of them in some of my blog updates.

The first was what partly inspired me to write in the first place; tabletop role play, or pen and paper role play.  Basically, it involves a bunch of people sitting around a table and effectively acting out the lives of a variety of characters created by themselves according to the rules of the game they are playing.  Depending on those rules, they might be a group of adventurers exploring a dungeon, a spaceship’s crew, or even a group of vampires.

I started tabletop role play with an old classic by the name of ‘Vampire; the Masquerade’ by White Wolf publishing.  This game casts the players as a variety of different kinds of vampire, all attempting to survive in the World of Darkness; the game's setting a world much like our own, only worse.  It was an easy introduction, as the game rules were easy to follow, particularly the rules for creating my character.  I favoured assassins and combat centred characters.  It was a good introduction.

After this, I got into another game by the same company; ‘Mage the Ascension’.  This was when things became interesting.  Mage was as deep background-wise as Vampire, except the magic rules in it were wonderfully free-form.  It was also the game that encouraged me to ‘GM’ my own games.  GMing stands for ‘Games Mastering’.  It’s always left to one person in a roleplaying game to keep things going; to introduce the players to the background, story, notable non-player characters and objectives.  I took to this and started crafting my own stories, writing them within the games background and allowing the players to run free within the narrative I created.

With the experience of Mage under my belt, I took a chance on a new roleplay game that had just come out.  A tactical RPG, which involved models as well as the player's imagination.  This game was called Cadwallon; it was amazing.

True, the edition my friends and I picked up was a direct translation from the original French.  As such, the English was a little ‘unusual ‘ and it required my good friend Gavin to go through the book and re-translate the rules to our liking.  Despite this, we loved the setting and the opportunities.

Over one year, we played 28 separate sessions of Cadwallon, all from stories I had created.  Over a dozen players were involved, sometimes all at once!  One night, I had three separate sessions going with three separate groups.  One in my kitchen, one in the living room and one briefly in my hallway!  It was a mammoth undertaking and I was immensely proud of the stories and situations we created from the game.

So much so, that it formed the nucleus of my own fantasy world that, in turn, would lead to writing my first Haldred Chronicles book ‘Alyssa’.

After Cadwallon I continued to play RPGs.  Rogue Trader, from Fantasy Flight, was particularly good fun and was played on a scale like Cadwallon.  It encouraged me to apply my writing style to several short stories that I subsequently submitted to Black Library, albeit without success.

Today I don’t get to play the games as much, but I still find myself collecting the rule books and background.  These still very much interest me.

Next, I’ll let you in on another passion.  Wargaming…

JG Cully
Belfast, Northern Ireland, United Kingdom
JG Cully lives and works in Northern Ireland. His healthy obsession with wargaming and table top role play games eventually led him to write his own stories. He has been writing fantasy books since 2012 and he completed his first full novel as part of the November writing challenge ‘Nanowrimo’. He is husband to a supportive wife, father to an energetic 2 year old and a gaming enthusiast. 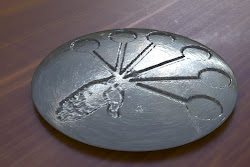